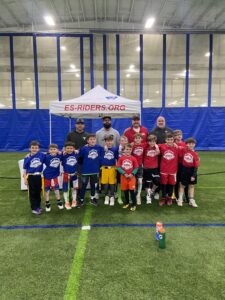 Back in December, our newest program hosted its first ever event to introduce our nonprofit to the public. It was held at the NH Sportsplex in Bedford, NH where we had two youth flag football teams compete against each other while we raised funds for ES Riders. We had an amazing turnout and it was great to see how many supporters showed up. We had the game live-streamed on Twitch, adding a professional component to this game. The value of this event dug way deeper past raising any money or promoting our new program.

The smile on all of the kids faces was better than any donation we could have received that night. They were so thrilled to have the game live-streamed for everyone to watch. Of course, they loved playing flag football but we believe this evening left a long-lasting effect on their idea of giving back. We got to educate them with the concept of giving to those in need and the idea of being selfless sometimes.

We believe in teaching the younger generation the importance of what we do. We do not think that they are taught enough the severity of things going on in the world today and the impact that they can make. By showing kids this side of society, they begin to realize that someone else will always have it worse than themselves. We believe this event opened up their eyes way further beyond a flag football game.

Moving forward, we want to emphasis the importance of involving kids in this process. If they are taught at a young age, they will have more opportunity to make a difference as they grow up. They will be taught the value of giving back and talk about it with their friends at school. We hope to do more events like this in the future to expand on this first event. We hope to see other nonprofits including children in their work so we can help teach the younger generation more and more everyday!

The Reality of Marketing a Nonprofit During The Pandemic

One Reply to “Can’t Forget About The Youth!”

I love the latest blog post and couldn’t agree more!

Scooter delivery!! 🛵🏍 Yesterday, we were ab

It’s official: Six more weeks of winter are on t

MONDAY MOTIVATION 🤩 Wake up and take on the da

🚨SCOOTER AVAILABLE🚨 We have received this w

Happy Friday everyone 🙏🏻🙌🏼 We want to

We are excited to introduce to you all Sumit Adak

Everyone needs a pick-me-up sometimes 😁 With e

Hello everyone 👋🏼 We hope that you are havin

🚨ANNOUNCEMENT🚨 We have scooters available f

HAPPY NEW YEAR 🙌🏼 From everyone here at ES

We hope everyone had a wonderful and safe holiday

Happy FRIDAY! We are excited to announce a new bl

Today we want to remind you what your help could d

Our new scooters have arrived and created more excitement for all of our ES Riders. Sponsor one of our scooters for only $1,000.00